OLD LYME – Perhaps 35 people showed up at a public hearing on Monday night in Town Hall for a conversation before the town’s Zoning Commission regarding an application to create a straightforward procedure for nonprofits to apply for a variety of new uses under zoning rules, including limited housing, food service, retail, and recreation.

A second public hearing on a proposal for Halls Road was postponed by the Halls Road Improvements Commission shortly before the meeting.

After a sometimes testy meeting last week between attorney Terrance Lomme, representing Lyme Academy of Fine Arts in the application, and the Historic District Commission, it appeared on Monday night that the two parties remained miles apart from an agreement. And nearby neighbors and assorted board members in attendance, for their own part, appeared no closer.

Lomme told members of zoning that he was surprised by a letter submitted earlier that morning by the Historic District Commission opposing the changes, after what he described as a “fruitful” conversation with its members.

The letter, which Lomme said he had not had sufficient time to review or discuss with his client, warned that “a new overlay zone could result in irreparable alterations to the special characteristics of the district.”

Over the next hours the conversation turned on key two points:

On the one hand, a clear desire on the part of members of zoning to give deference to the concerns of the Historic District Commission

And on the other, appeals by Lomme to the broad discretion and authority of the Zoning Commission over the matter, and any future plans proposed under the new rules.

“We had, again what I thought was an open conversation and discussion. That was informative on both sides,” Lomme told members of zoning, “But I did not expect the tenor of the letter to be what it was, or the content. My view of that letter was, frankly, that it seems to undercut the jurisdiction of this commission. And I was quite surprised by that. As this commission is aware, the Historic District Commission doesn’t have jurisdiction over this kind of application … In essence, it appeared that they were not only trying to sort of reclassify your job schedule, but also, in essence, rewrite the regulation.”

Zoning members who spoke, however, expressed significant reluctance to approve a measure that would not satisfy both sides, leading Jane Marsh, a member of zoning, to ask whether Lomme would opt to withdraw the application, or seek a continuance, until more efforts were made to bridge the divide.

“You’ve got to come together, regardless, because it’s kind of an important subject for the both of you,” urged Paul Orzel, who chairs the Zoning Commission.

“So, Halls Road, I have a warm fuzzy on,” explained zoning member Michael Miller. “They came before us. They had a plan to basically change the entire zoning regulation for that area. We felt that wasn’t something we’re going to do. They came back. They vastly improved their plan … and their plan is certainly almost ripe, perhaps. This plan, though, we don’t have that same warm and fuzzy of what I’m looking at.”

“It’s the Historic District Commission’s considered opinion that the proposed new overlay zone can result in irreparable alterations to the historic character of the district,” Mallory warned commission members. “The HDC therefore proposes that the Zoning Commission not approve Lyme Art Academy’s overlay zone initiative, and instead, that the Zoning Commission and the Zoning Board of Appeals continue to evaluate individual changes in the district on a case by case basis. This process has for 50 years successfully protected the special character of the historic district for residents, visitors, existing commercial businesses, and nonprofits.”

“Is there room to come together and work with the Lyme Academy in the creation of this?.. to me I sense there is room to work” Orzel asked Mallory.

“There is always room to work,” replied Mallory. “But the broadness of the Lyme Academy’s proposal is part of what has prevented us from being able to feel comfortable with it.”

Eric Knapp, an attorney and land use coordinator for the town, assured Zoning Commission members that if the overlay was approved, they would still have significant discretion to approve or reject future proposals under the rules on a case-by-case basis.

That prompted Marsh to ask, hypothetically, whether by that argument they might approve massage parlors as a use someplace in town, because they could always reject them later.

“But you do want the overlay zone to be a desirable overlay,” suggested Marsh. “Because we wouldn’t, you know, we don’t want to say to 20 Massage parlors, they can all get together and all locate themselves anywhere and then say well, but later we’re going to say no.”

At that point, Orzel opened the floor to community members and interested parties to speak.

Tom Schellens, a nearby resident and longtime former member of the town’s Zoning Board of Appeals, stood and spoke strongly against the proposal calling the overlay “an I want, rather than I need,” “vague in scope and boundaries,” posing a “creep of commercialism into our residential neighborhood.”

David Kelsey, who sits on the board of Lyme Academy of Fine Arts, and is the principal funder of CT Examiner, stood and spoke for the overlay, arguing that the academy shouldn’t be forced to “walk on R-80 eggshells” – referring to the residential zoning in the district – and that “five people shouldn’t decide what happens in the historic district.”

“Right now, the Lyme Academy has an enormous, enormous chance of being the foremost artist atelier in the world,” said Carol Jones, a Lyme Academy of Fine Arts trustee and Lyme Street resident.  Jones told the committee that the overlay would give the academy more clarity about what’s possible, protecting the nonprofit from pouring money into plans that never come to fruition.

Jones pointed to the Café Flo and the Florence Griswold Museum as an example of a successful model for the academy, which shouldn’t be opposed because “of the slippery slope committee saying never, never, because what will happen 50 years from now.”

Carolyn Wakeman, speaking as someone who had grown up in Old Lyme, and as a member of the Historic District Commission, emphasized the decades of care and careful balance that has preserved the historic center of the town.

“There’s a long history of attempting to make a balance between commercial use in the town, and the growing population, and the Historic District, and it really has worked out really well … and we don’t want to make any unexpected changes in that situation, in that balance.” said Wakeman.

Meanwhile, Edie Twining, who sat with Lomme during the hearing, and who chairs the Halls Road Improvements Committee, circulated an email explaining that the Halls Road proposal would be postponed while attorneys completed a legal review of the proposal, and they tried to resolve a potential legal challenge to the proposal:

“Earlier this morning, members of the Halls Road Improvement Committee and their attorney were informed that the proposed overlay district was still awaiting review by the town’s land use counsel. In addition, it was also learned that at least one property owner within the proposed overlay district had retained legal counsel in reference to concerns with the proposal. The requested continuance will allow the town’s land use counsel to complete his review of the overlay district proposal and also allow the Committee the opportunity to meet with said property owner(s) in an effort to resolve their concerns amicably.” 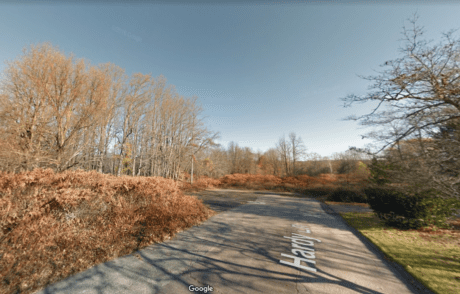