Hayley Jane is a singer-songwriter with a commanding, vibrant and soulful way of performing, whether with a microphone or a guitar in her hands. She set the foundation for her music career during the previous decade in Boston with the soul rock & roll act Hayley Jane and the Primates. Since then, she’s forged her own solo career while collaborating with numerous musicians and bands including Ryan Montbleau and Roots Of Creation.

On Jan. 22, she’ll be performing with her Primates bandmate Justin Hancock as an acoustic guitar duo at Park City Music Hall in Bridgeport. It’s an event that promises a different take on their band’s music along with a few songs from Hayley Jane’s solo discography.

We talked about what’ll make the upcoming show stand out, moving back to her home state of California, being excited about coming back to the Northeast and looking to do a lot of collaborating this year.

RD: When it comes to performing with Justin Hancock as a duo, what in your opinion makes it unique versus other musicians you’ve collaborated with?

HJ: The interesting thing about the songs that Justin and I do is that we put them together as the two of us before we’d bring them to the rest of the band. What’s cool about seeing us as a duo is it’s almost like getting to see the songs in their rawest form. We would sit and write together before we would write as a band, which ended up happening later on and that’s when the sound really took shape. There was such a change in members of the band, but Justin has always been the one constant. He and I would write together, sit and come up with these tunes and we would bring them to the band to have them fill out into these big sounds, which was a lot of fun.

Going back to the way we originally wrote them is really special. I’m playing way more guitar now and that’s going to give Justin the opportunity to really take off with his solos, he’s an amazing lead guitarist and I’m just honored to have gotten to the point where I can now back him up on rhythm. This show specifically will be the first time we’re playing together on guitar at this level and we’re really looking forward to it.

RD: It sounds awesome. When it comes to the both of you playing these songs that are also part of The Primates repertoire, are there any adjustments being made to capture a similar essence? How do you both attain the similarities between yourselves as a duo and the band as a whole to make the songs come alive?

HJ: Besides the melody and lyrics, I don’t know that there are big similarities. We’re talking about a huge five-piece band with bass, drums, guitars and keys making a big sound, so I think what happens is the focus falls more on the melody, lyrics and Justin’s solos. It’s a very different experience but I would say that it’s almost more emotional and more focused on the lyrics, the melody and the emotion of the song. When you’re doing a full band show, you want to keep people dancing, partying and having a good time and that’s what we would do. We would play a slow song here or there but even with these songs that would usually be extremely high-energy & upbeat, say a song like “Hey Mister”, they would be brought down to this acoustic level where you can’t help but really listen to what I’m saying.

There’s a lot of good distractions with the band, like dancing and my movement, which is all taken away when I strap a guitar on and we’re just playing with two guitars & the vocals. I think it becomes more intimate and you start to hone in on what the song is really about and what the emotion is really about. I can pull that from an audience at a full band show but it’s in a more high-energy way and I think by performing these songs in this way along with some of my new songs we’re just going to get a little more emotional and a little more intimate.

RD: It seems like it’ll be a lot more of an organic musical experience. You’re originally from California, you established your music career while living in New England, specifically Boston and Vermont and now you’re back living in California which is kind of full circle for you. With this being said, do you consider this run of shows you have happening around the Northeast during this month and next month to be a bit nostalgic since you have such deep roots in the area?

HJ: 100%, I’m so excited to get back. I moved to Boston when I was 19 years old, I stayed there until I was 30 years old and then I moved to Vermont and I stayed there until I was 35 so I was on the East Coast for 15 extremely formative years. It’s where I built my relationships, my friendships, my music career, everything. The pandemic brought me home and I’m really grateful that it did. I got to spend some real time with my family, I had a lot of growing experiences and I tried new things when music was shut down.

I ran a shop in Carmel [by-the-Sea], it was very humbling to go back to retail and I’m grateful for those experiences because now I will never complain about sitting in a green room bored ever again. I’m just going to have nothing but gratitude to see all of my friends, to play a lot of venues that I’ve played over the years like Atwood’s Tavern [in Cambridge, Massachusetts] specifically. When Park City Music Hall used to be The Acoustic we did a New Year’s Eve there, to go back there now after having been through everything that I’ve been through with trials, tribulations and just life as a fully formed adult versus the roaring of my 20s, the mistakes and all of the changes that happened I’m just so grateful. It’s extremely nostalgic but I also never really left, I might have moved out West but I’ve been coming back quite a bit and my hope is to just be bi-coastal. I couldn’t choose if I had to, I just happen to live out here right now because that’s what worked for me and especially during the pandemic.

RD: I totally get that. It’s a very interesting perspective to have. Along with seeing family and stuff, how has it been living back in California?

HJ: Funny you should ask, I was actually recently planning on moving to a cabin in the woods there but unfortunately due to the weather and other factors it didn’t work out so I’m back living with family up in the Carmel-Monterey area. I’ve always considered myself to be in transition and when I tell people that I realize that I’ve been saying it just about every year for about 15 years. It’s true, I’m always shifting, I like changes of scenery and I like to travel. I’ve moved every single year since I was 17 except for one time in Burlington where I lived somewhere for two years so I’m constantly on the move. I haven’t settled quite yet, I’m still trying to figure out if I want to do that on the East Coast or the West Coast so I didn’t get the isolation I was expecting with the cabin.

I was expecting to go in there, really focus on writing new songs and painting and that just didn’t pan out. I just started on this tour, so there it is.

RD: Moving around everywhere and having that transitional kind of life goes along with being a full-time musician, so maybe it’s meant to be like that.

HJ: It sure does.

RD: Later on in March you’re going to be doing a big tour with the Asbury Park, New Jersey jam band Dogs In A Pile, but what are your plans afterwards? You just mentioned how you want to start writing new music so do you plan on doing that and then going into a studio to make a new album?

HJ: What’s cool about what’s happening with Dogs In A Pile, if I can preface, is I’m meeting up with them at the end of the month to write with them for a week.

HJ: Yeah, they’re going to back me up on the tour as my band, I’m going to open for them and we’re going to write new songs. That’s going to be a big undertaking and a lot of fun, I don’t know what we’re going to end up doing with the songs, we’re all just going to let the creativity flow and see what happens. After the tour, what I’m looking to do is right now The Primates are still on hiatus and probably will be for a while so I’m looking to put together a new band. I’ve been working with Josh Dobbs, who played with The Primates on keys during the last six months before our hiatus, and he’s someone I feel very musically & spiritually connected to and I really look forward to doing some writing with him. I plan on going back up to Burlington in March to do that and see what comes from it.

I love collaboration, different people bring out different things in my writing. I love writing alone, it’s very vulnerable and very telling where you tell all your secrets and tell on yourself which I love, but writing with other people brings out different things in you that you didn’t even know were there. I’ve also connected with my friend Smiley from The Main Squeeze, we have a couple unreleased songs that we’ve done together. I just want to work with whoever feels right, we’re going to feel into it and see what happens. I’m looking to just kind of do a lot of collaborating in 2023 because I find it to be when the music gets the most interesting. 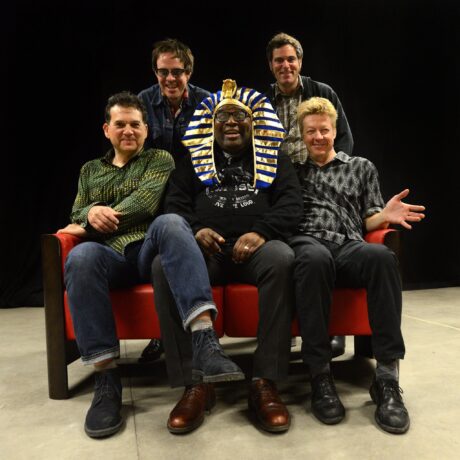 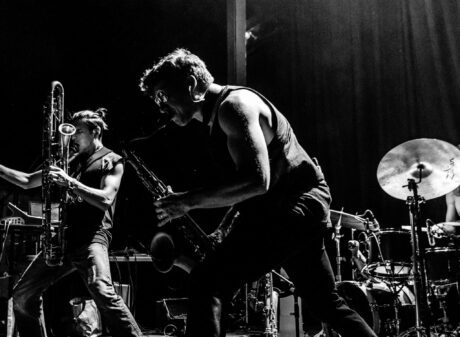 Moon Hooch to Take Fairfield’s Warehouse Into Orbit on Sunday