UNCASVILLE – A new salt distribution facility working off of a small pier on the Thames River has brought new life to an industrial site that sat vacant for years, but noise from overnight work on the property and the promise of heavy truck traffic through their residential neighborhood has sparked complaints from neighbors.

Last week, Gateway unloaded its first load of salt that was shipped up the Thames River, causing what neighbors described as repeated, loud banging in the middle of the night.

Richard Daigle, who lives just a few hundred feet from the new salt pile Gateway unloaded, told CT Examiner that the noise made it impossible to sleep when Gateway was working overnight to unload what the company said was about 25,000 tons of salt from barges.

“It was so loud at my house that I thought somebody was breaking into my house,” Daigle said.

Montville Mayor Ronald McDaniel told CT Examiner he received three calls from neighbors last week who were concerned with the noise from unloading the ship, which he said took a couple of days and wrapped up last week.

“There was a paper mill down there that was in operation 24-hours a day, with trucks in and out of there all the time,” McDaniel said. “Once they shut down, I think people got used to it being a very quiet neighborhood. And now that somebody is reusing the industrial site, it’s a shock to the system.”

Daigle, who has lived in the area his whole life and worked at the paper mill before it closed, said the disturbance is different than when the mill and power plant were open – partly because Gateway cleared trees and land that provided a natural buffer to the noise to make room for their salt piles.

“I built a house here in 2005 [when both were open], and if I thought it was going to be noisy and obnoxious, I never would have built the house,” he said.

Planning Director Liz Burdick told CT Examiner that she just learned about the complaints, but has spoken with representatives from Gateway. Burdick said the company has been “very willing” to work together to find a resolution to the noise – possibly re-planting trees or putting up another noise barrier, and limiting when it works overnight.

“There will be some all-night operations, but they’ll be limited to when, perhaps they’re offloading a barge or there’s a storm event,” Burdick said. “Other than that, they basically have normal 6 to 8 p.m. hours.”

Gateway spokesman Justin May said the noise complaints were sparked by banging tailgates and alarms as trucks backed up, and that the company was reviewing ways to lessen the noise. The company said night operations will depend on “the needs of the facility.”

Daigle said he hopes the company and town will be able to come up with a way to buffer the noise from the operation, but he said he doesn’t see how they can address the neighborhood concerns with truck traffic – which he said is projected to be much heavier than truck traffic to the paper mill and power plant.

Daigle said it was a surprise when Gateway notified the neighborhood over the summer that they had been approved to start distributing salt, which would mean more heavy trucks coming through the neighborhood – particularly in the winter when the company told the Planning and Zoning Commission as many as 65 trucks an hour would come through to pick up salt ahead of storms.

Plans for the salt facility were approved unanimously by the Planning and Zoning Commission in July. Gateway’s proposal was allowed “as-of-right” in the industrial-zoned property, and did not require a public hearing before the commission approved the company’s site plan.

The road salt distribution is just the first part of plans for the site. Gateway’s parent company Enstructure previously told CT Examiner the parcel’s access to the river, railway and I-395 make it an ideal location to move other materials – possibly including materials needed for turbine assembly at the New London State Pier 5 miles down river.

The site along the Thames River is a little over a mile from I-395, where trucks can connect to I-95 or head north to Massachusetts, but first must pass through the neighborhood on a shoulderless, two-lane road. An entrance for trucks picking up salt starts about 200 feet from the nearest home.

Long lines have been a feature at other salt distribution sites when trucks come to pick up salt before big storms, but Gateway said it has “sufficient room inside the facility for staging” trucks.

Daigle said he’s still worried about what the neighborhood will look like ahead of a storm and voiced concerns that on such days neighbors wouldn’t even be able to leave their driveways — and that’s without considering future business on the site.

“They say the town’s gonna try to work with those guys about the noise, but I don’t see what they can do with that truck traffic,” he said.

McDaniel said he was hopeful Gateway and the neighbors could come to a solution that would make the operation “as palatable as possible.”

“People need to enjoy a certain quality of life,” McDaniel said. “At the same time, the region needs salt and other materials. When winter finally does come, I’m sure it’s going to get a little more hectic down there.” 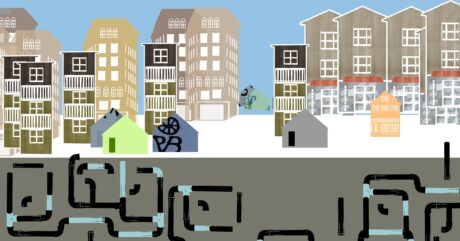