Two days before Tuesday’s meeting of the Vision Zero Task Force – created to eliminate traffic deaths on Stamford streets by 2032 – a woman died in yet another crash.

The downtown accident occurred blocks from a double-fatal crash that took the lives of two 25-year-old pedestrians on Dec. 3. Giovani Vega Benis and Yuliana Arias Lozano, co-workers at a nearby restaurant, were killed by a hit-and-run driver while crossing Washington Boulevard, police have said.

During the task force meeting Public Safety Director Lou DeRubeis said police are still investigating their deaths and hope to provide information “in the next couple of weeks.”

The hit-and-run has drawn widespread attention in the Hispanic community, which last week organized a rally demanding justice for Vega Benis and Arias Lozano. Police have identified Greenwich resident Michael Talbot, 24, as the driver but have not charged him.

It was one of six fatal traffic accidents on Stamford streets last year. Now, on the first day of 2023, there’s been another.

It’s the reason Mayor Caroline Simmons formed the Vision Zero Task Force in September. Vision Zero is a strategy designed to eliminate traffic fatalities using a human-centered approach to street design. Employed in Europe for many years, it is gaining momentum in the U.S., encouraged by the Federal Highway Administration.

Tactical urbanism projects are small-scale, low-cost and temporary – a way to try out street design changes to see how they work. Traffic engineers use different types of signs, cones, barrels, paint, tape and planters to slow down cars and make intersections safer.

If the temporary design achieves its aims, it can become permanent.

Tactical urbanism projects have been a success in Jersey City, N.J. It’s a New York City suburb, like Stamford, but with a population of 284,000, it’s twice the size.

According to a Dec. 28 story by Bloomberg News, Jersey City went a whole year without one traffic fatality, even as the number of crashes in that state spiked.

The techniques were used only on city streets that Jersey City officials control – not state or county roads, where the number of traffic deaths continued to increase, Bloomberg reported.

Jersey City officials researched troublesome spots and installed speed humps or made small changes to crosswalks. At a few intersections, they installed mini-roundabouts using traffic cones, planters, barrels, paint and plastic delineators that forced motorists to slow down and made it easier for pedestrians to cross, Bloomberg reported.

Officials were judicious in choosing projects – they did not remove on-street parking, for example – but nearly three-quarters of survey respondents said the changes should be permanent, and Jersey City had its safest year on record, Bloomberg reported.

At Forest Street and Greyrock Place, Stamford traffic engineers have installed a tactical urbanism project using red planters and flexible plastic delineators. They narrowed the wide intersection to slow traffic and make it easier to see pedestrians in the crosswalks.

Luke Buttenwieser of the city’s Transportation, Traffic and Parking Bureau told the Vision Zero Task Force Tuesday that the experiment there is working.

“It’s a high-volume pedestrian area and a high-crash area,” Buttenwieser said, and “it cost us nothing” to make it safer.

Four of last year’s six fatal crashes in Stamford involved pedestrians. Five pedestrians were killed. An average of nearly seven pedestrians a month were struck and survived, according to information from the Transportation, Traffic and Parking Bureau.

Buttenwieser told the task force that the bureau is using a map that pinpoints sites with high pedestrian volume and high numbers of crashes to come up with a list of about 20 sites citywide where they can use paint, bump-outs, cones and other low-cost tools to improve safety in 2023.

The goal, he said, is “to initiate quick projects that will lead to more concrete, permanent measures.”

He said the bureau is looking at a technique used in other cities to lower the number of particularly dangerous crashes involving pedestrians and an ever-growing number of SUVs or pickup trucks.

“They’re higher up and they have more blind spots, and they’re more likely to hit someone while turning in an intersection,”  Buttenwieser said.

The technique is to install mini speed humps on the center line of a road to slow vehicles as they turn, Buttenwieser said.

“Left turns, and turns in general, have more crashes,” he said.

Residents may report dangerous intersections by filling out a form at FixIt Stamford, he said.

Transportation, Traffic and Parking Bureau Chief Frank Petise said engineers are pursuing multiple grants for dangerous traffic spots in Stamford, including the five-way intersection at Strawberry Hill Avenue near Stamford High School. The bureau has secured a grant for Bedford and Forest streets downtown, which Buttenwieser said has the highest number of pedestrian crashes in the city.

Beyond that, the bureau on Dec. 29 put out a request for proposals to traffic engineering consultants interested in executing Stamford’s Vision Zero Action Plan. Bids are due Jan. 26, according to the city’s website.

Simmons joined the task force’s virtual meeting to say that all five pedestrian fatalities in Stamford last year occurred on state roads, including Washington Boulevard, where so many crashes have occurred over the last two decades that it’s earned the nickname “boulevard of death.”

Petise said the state Department of Transportation may allow the bureau to try Vision Zero strategies on the busy state roads that cut through Stamford.

“Part of the discussion we’ve had with the DOT is they have not allowed us to do this type of thing on state roads in the past, but they seem to be more open to that now,” Petise said.

The task force hopes to have a data dashboard set up by next week, members said. It will allow citizens to view information about where crashes occur and compare Stamford to other cities in Connecticut. The Vision Zero Task Force website can be accessed here. 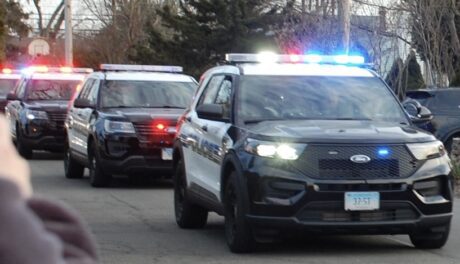 Hundreds of Elevator Malfunctions in Stamford and No Clear Fix

Hundreds of Elevator Incidents in Stamford, Dozens in Harbor Point With Little Accountability