COLCHESTER — A hearing next week will determine whether the town is able to enter into a contract for the construction of a new senior center that will push the total cost of the project about $1 million over the $9.5 million approved by town referendum in November 2021.

Selectman Jason LaChapelle, who filed a lawsuit against the town on Dec. 1 to stop the project from going forward, told CT Examiner in a phone call on Friday that he wasn’t opposed to the senior center project in itself, but the idea of going beyond what the taxpayers approved.

“I didn’t like the price tag, but that is now immaterial and irrelevant. These taxpayers voted and approved $9.5 million. If they want to start construction tomorrow on a contract that does not exceed cumulatively $9.5 million, I have zero issue with that,” he said.

He said his concerns stemmed from a larger question that goes beyond the scope of the senior center project.

“What legal authority does a referendum hold? … When the taxpayers vote on a referendum that says, shall not exceed $9.5 million, what precisely does that actually mean?” he said. “My concern is the fact that I don’t have the answer to that question.”

The hearing, which was to resolve a temporary injunction issued by Judge Steven Jacobs last week, was scheduled to take place on Tuesday. But Donald Brown, attorney for Selectman Jason LaChapelle, said he needed more time to review the documents he had received that day, and asked to postpone the hearing.

The documents include two “motions to quash” subpoenas for town attorneys Matt Ritter and Glenn Rybacki to produce documents and testify on the matter.

The motions claim that the documents requested, which include “any written communications with any of the Selectmen of the Town of Colchester, including the First Selectman” is overbroad and contains correspondence that would count as attorney-client privilege.

Town attorney Andy Zeitlin said that they wanted to have the hearing as soon as possible because the bid would become obsolete in mid-January. The hearing is scheduled for Wed. Dec. 28 at 10 a.m.

First Selectman Andreas Bisbikos said during a joint meeting of the Board of Finance and the Board of Selectmen in November that he wanted to use a donation of $575,000 that was given to the senior center combined with money from the undesignated fund balance. But LaChapelle said he thought the project needed to go back to referendum. LaChapelle, along with Chair of the Republican Town Committee Taras Rudko, filed a lawsuit against the town on Dec. 1 to block the town from moving forward with the fund appropriations.

Town Attorney Matt Ritter  said in an email to the Board of Selectmen that the donation would be considered a grant under the town charter but not for the purposes of the referendum.

“The donation to the Town for the Senior Center project is not a ‘grant’ as contemplated by the language contained in the bond resolution,” Ritter wrote in an email. But he added that, for the purposes of the town charter, he believed the donation was “similar enough to a grant to remain excluded from the town meeting/referendum requirements.” This would mean the money could be added to the project without triggering the need for another referendum.

“That seems like legalese to me,” said LaChapelle. “Like, we can make this be whatever we want it to be based on how I choose to interpret any given legal wording.”

Bisbikos told CT Examiner in an email on Tuesday that the donation was specifically set aside for the senior center, and that parts of the donation from the same estate had already been appropriated to fund police cruisers and a K-9 dog. He said there was nothing in the town charter to stop them from using it.

At LaChapelle and Rudko’s request, Judge Steven Jacobs issued the temporary injunction against the town after Selectman Rosemary Coyle said in an email she planned to propose that the Board of Selectmen enter into a contract with the lowest bidder for construction on the senior center project, BRD Builders, for $8,625,000. With soft costs added in, the bid is projected to push the project costs to $10.2 million.

The Board of Selectmen decided at its meeting last Thursday that they would not take any action on the project until after the court hearing. The meeting was contentious — some members of the public accused Bisbikos and Coyle of pushing beyond the limits of what residents had approved, while other residents emphasized the need for a senior center and pleaded for town officials to work together.

Tony Tarnowski, chair of the Senior Center Building Committee, told CT Examiner that in October he had met with Coyle, Bisbikos and members of the Board of Finance to discuss how to address the overage after it became clear that the cost of the senior center would be between $1 million and $1.5 million more than was approved by referendum. He said they felt the appropriation of the additional funds was the best way forward.

Tarnowski told CT Examiner that entering into the contract with BRD Builders would give the town the opportunity to modify the project and potentially bring the cost down.

“We cannot do that until we have a contract in place. If we wanted to talk to the contractor about cost-saving measures without a contract, we would have to do the same with all 11 bidders,” said Tarnowski.

Coyle told CT Examiner that town officials had not expected the project to go so far over budget, and said that she believed the current bid was the most “reasonable” the town would receive for the project.

“I don’t think anybody anticipated it would go over so much with the rising inflation and the supply chain issues, and just the construction costs that are rising,” she said.

Coyle said at the meeting that she was concerned that if the town had to go back and bid again, the bid would probably come in even higher and cost the town more.

But LaChapelle said that while he thought it was a “fair guess” that the project cost would go up if they had to go out to bid a second time, he felt that this problem could have been avoided if the town had gone to a referendum as soon as they realized the cost of the project was over $9.5 million.

“They could have gone to referendum and convinced the taxpayers to appropriate additional funds long before today,” said LaChapelle. “We have done referendums in three to four weeks before. We could have done it again.”

Coyle told CT Examiner that it would make “no logical sense” not to use the donation money for the project.

“All I want to do is do the right thing and move this project forward, because it’s in the best interest of the town and the seniors really deserve it. They’ve been waiting over 20 years,” said Coyle.

Bisbikos said in an email to CT Examiner that while he supported using the donation, he did not want to use additional taxpayer dollars, such as money from the undesignated fund balance, without voter approval through a town meeting or referendum.

He said that going to referendum was still an option, but right now it was “Plan B.”
“I would support having the voters weigh in on any additional appropriation. I feel that a Town Meeting for an appropriation of additional funds would be a safer bet to pass than a referendum (which could potentially turn into a malicious mini campaign). I would not support any measure that would increase taxes on the community,” Bisbikos wrote in his email. 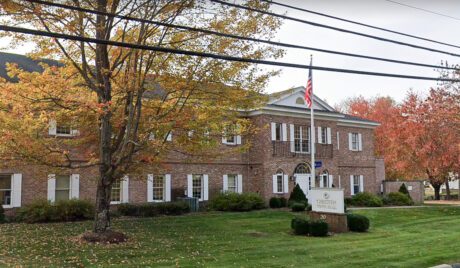