Since getting their start in the New York City subways back in 2010, Moon Hooch have been perfecting a sonic style that they like to call “cave music.” Saxophonists Michael Wilbur and Wenzl McGowen lead a rhythmic assault that usually causes people to dance. This is particularly the case with their live shows with touring drummer Cyzon Griffin serving as the anchor with his beats, fills and leads.

Folks in Connecticut will get a chance to experience it when Moon Hooch performs at The Warehouse in Fairfield on Dec. 11.

Indie hip hop artist Jackson Whalan, who hails from the Berkshires, will be kicking the night off at 8 p.m.

I talked with Wilbur and McGowen about collaborating with a legendary astronomer’s grandson, putting traffic cones in their saxophones, planting trees with their fans and a really cool album they’ve been working on.

RD: Back in March, you guys collaborated with astronomer Carl Sagan’s grandson Tonio for the track “One Planet” which has music played to a transcript of Carl in a spoken word format. How did you all get together to create this very unique track and how did you get the audio from the transcript?

MW: The transcript is about the possibility of nuclear war, the threat of nuclear weapons, our responsibility as humans to find peace between one another and to start treating the planet with respect. Tonio Sagan is a producer & MC along with being a good friend of ours and he has access to all of Carl’s speeches, he has the rights to those. He approached us and he’s wanted to make a track with us for a while. Whenever he makes music, he always wants it to be very impactful while having a strong message and he figured there wouldn’t be a better way to use his grandfather’s speech about the planet.

RD: I think it’s great, it’s a really cool track. A month before that Moon Hooch released the album 2021: A Hooch Odyssey exclusively on Bandcamp to take advantage of the platform’s “Free Fridays” where they waive commissions and give 100% of sales to the artist. It features some new songs along with some remixes of old tracks, so did each of you handle the remixes separately or did you do them together?

MW: Wenzl had the idea to take songs from our first album and make some remixes, so he kind of started that process. We have a way of working together where we essentially pass the project back and forth, produce it and mix it until it’s ready to be performed. We rehearsed it a bunch in my garage until it was ready to go and then we recorded it.

RD: Has it been more beneficial for you guys to have it on Bandcamp to take advantage of “Free Fridays” versus having it on all the music streaming platforms?

MW: Yeah, we originally first put it out on there but now it’s actually available on all platforms. It definitely helped a lot.

WM: The traffic cone makes the saxophone have a lower tone. We initially started using them because we wanted to have some bass but we couldn’t afford a bass sax at the time. I saw some cardboard tubes on the side of the road and I stuck them into my tenor sax, which made that lower sound. Later I ended up losing that cardboard tube so I used a traffic cone to replace it. I went to a plumber to have it cut and yeah, it makes it come through in a lower tone.

RD: You’re very passionate about environmentalism and sustainable living, so how do you maintain this ideal & vision while on tour? Do you have a van that’s either electric or customized in a way that it doesn’t give off carbon emissions?

WM: Well, we’re far from perfect and we’re currently driving a diesel van, but what we’re trying to do is offset our carbon footprint by planting trees. We raise money at every show by raffling off a tree and we use the money that we raise to organize tree planting events around the country. We’ll bring our fans together, go to a farm and plant trees all day.

RD: That’s awesome. Do you guys partner with a non-profit for this? How do you get these tree planting events in motion?

MW: At first, we were funding it entirely ourselves but now we’ve partnered with a non-profit called Team Trees and people can go directly to our website and donate to them. They actually have a few organizations they work with that plant trees and it’s been really exciting to work with them because obviously we’re full-time professional musicians, we’re not full-time professional landscapers. We can only do so many tree planting events a year, so this is a nice way to add to our mission and on top of that we’re also vegan. The whole touring party is vegan and factory farming is actually the leading cause of greenhouse gas emissions by a landslide, so by eliminating meat & dairy from our diets we’re greatly reducing our carbon emissions. Again, it’s not perfect but it’s a step in the right direction.

RD: That’s ultimately what matters, a foot forward rather than a foot backward. What are your plans for next year? Can we expect a new record from Moon Hooch, either a full-length or an EP or do you have other plans in the works?

WM: We’re working right now on a covers album, it’s our first covers album ever and it probably has the most electronic music sound that we’ve ever had. We’ve spent the most time we’ve ever spent on an album with mixing and producing, we really want to put something out that’s on the level of pop music. That’ll be out either in January or February and we’ll also be touring Florida & Texas around that time, there’s other tours in the works including some shows in Europe and stuff like that. 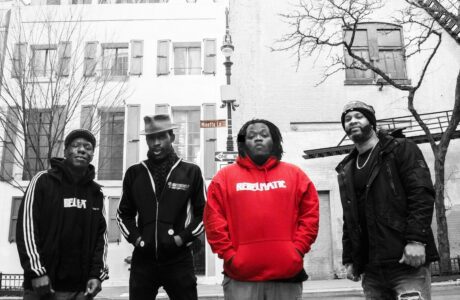