This Thanksgiving, Leroy Jordan is grateful for his friends Ellis Crawford and Reggie Spears.

The two support what Jordan has made his life’s work – helping the people who live on the streets of Stamford.

This time of year, Crawford and Spears collect coats and jackets for the men, women and children in the city who have no homes.

Jordan, an outreach worker for Stamford’s Pacific House shelter, shares with his friends the plights of the people who, by the state’s definition, live “in places not meant for human habitation.”

For a person who is chronically homeless, Jordan said, a coat or jacket is a one-time thing. If you have no place to hang it, you own it only as long as you wear it.

“They try to travel as light as possible,” said Jordan, a lifelong Stamford resident who has been an outreach worker for 23 years. “Besides that, things get lost or stolen or just left behind. If someone has a new jacket this winter, they most likely won’t have it next winter. They need a new one every year. To have a jacket is really big.”

So Jordan calls on his longtime friends, Crawford and Spears – personal trainers and partners in All American Athletes fitness center on Research Drive – who put out a call to their clients that warm clothing is needed on the streets.

“We have good clients. They love to help and make sure people are OK,” Crawford said.

“When it’s cold, we all want to keep somebody warm for the night,” Spears said.

Cold is the brutal enemy of people without shelter, and the need for shelter is enormous, Jordan said.

“I’ve never seen it this bad,” he said. “I work with all the agencies in the state, and everyone is saying their numbers are up tremendously.”

That’s reflected in a state report released last month. It showed that homelessness in Connecticut, after falling for eight years, increased 13 percent between 2021 and 2022.

Several factors contributed to the rise in homelessness, according to the report. They include continuing economic fallout from the pandemic; skyrocketing costs of rent, groceries and other necessities; and a severe housing shortage – vacancy rates for rental units in Connecticut are among the lowest in the U.S.

The housing shortage is so severe that people with Section 8 vouchers, a federal program that subsidizes rent in the private market for low-income families, the elderly, and the disabled, can’t find a place to live, Jordan said.

“I know four women and three single men with Section 8 vouchers who can’t find a place – and Section 8 is federal money that goes directly to the landlord,” Jordan said.

In Connecticut, the only way for homeless people to access help is to call 2-1-1 or use its online equivalent. Housing specialists who answer the hotline assess callers’ situations and refer them to providers in their area, or to one of the state’s seven Coordinated Access Networks.

The 2-1-1 specialists verify the caller’s situation with an outreach worker, such as Jordan. Once that happens, the caller is “activated,” Jordan said.

“But that doesn’t mean the person goes into a shelter. It means they go on a waiting list, because all the shelters are full,” he said.

In Stamford, the waiting list this week includes about 50 women, 65 to 70 men, and 35 families, Jordan said.

“What touches me and hurts me is to see families out there,” he said.

People are sleeping in cars, at the Stamford train station, at Cummings Beach, and in bus shelters downtown, he said.

“Some people are just walking around,” Jordan said. “Some homeless women bring their children to a relative’s house to sleep but there’s no room for the mother so she sleeps in her car. Then in the morning she picks up her kids and brings them to school.”

He found three men sleeping in the nook of a decorative brick wall that marks the entrance to a park, Jordan said.

“It was cold. I mean, it was below cold. My face froze just in the few minutes I was talking to them,” Jordan said. “One guy turned to me and I said, ‘How is your buddy? Is he alive?’ The guy said, ‘We’re OK.’ They didn’t want to come to the shelter. I don’t know how they do it.”

Two men in their 50s, natives of Poland, have been sleeping on Stamford streets for a decade, Jordan said.

“They live at one of the beaches. They refuse to come to the shelter, even though they are getting older and their bodies are breaking down,” Jordan said. “I recently heard from one of them. He said he was coming in. When he got here his whole body was shaking. We had to call 911. He’s still at the hospital.”

About 85 percent of homeless people “are dealing with mental health problems or substance abuse,” Jordan said. “The rest have just hit hard times – they lost a job or they’re going through a divorce settlement.”

For those who want shelter, the system is unfriendly, Jordan said.

The 2-1-1 hotline is jammed, he said. A call can take two hours, most of the time spent on hold, he said.

“The program was not set up to deal with this size of a homeless population. It was set up to give out information,” Jordan said. “What’s happening is people are getting the information and calling 2-1-1 back to say, ‘But what do we do now? We’re homeless.’”

According to the 2-1-1 website, CT.211counts.org, the top service requests from last November to this November were 29.5 percent for a shelter bed, 27.5 percent for low-cost housing, and 20 percent for rent assistance.

The hotline has been taking 1,000 housing-related calls a day, according to the website.

On Nov. 1, with funding for the 2-1-1 program running out, the state cut the hours from 24-7 to 8 a.m. to 4 p.m. seven days a week. But on Nov. 10 Gov. Ned Lamont announced his office would release $8.5 million in aid to connect homeless persons with housing, food and mental-health services.

Lamont’s office said the state Department of Housing is creating hubs that will accept walk-in appointments and receive direct referrals from 2-1-1 staff, with a goal to reduce call volume.

Pacific House, one of the largest homeless shelters in Fairfield County with 67 beds, is among the hubs, Jordan said.

But that will not fill the need this winter, said State Rep. David Michel of Stamford, who has worked on homeless issues during his years in the Connecticut House.

“There’s no reason to expect that a person on the waiting list will get a bed because that would mean that someone is leaving the shelter. Most likely the person who is waiting will live on the streets this winter,” Michel said. “I have a constituent, a 70-year-old woman, who lives in a van. People like her, who are not as elderly and don’t have accessibility issues, are much less likely to find a place. This is a bad situation.”

All the more reason to help, said Spears, who was a member of two championship Greenwich High School football teams, and Crawford, who played basketball, football and baseball at Stamford’s Trinity Catholic High School.

Spears said he learned from Jordan that “people don’t get help unless they hit rock bottom. The system doesn’t do much to prevent people from hitting the bottom. They get help once they’re in a shelter.”

The situation calls for everyone to pitch in, Crawford said.

“We just want to provide whatever help we can,” Crawford said. “We want to do our part in the community.”

Jordan said something has struck him over the years – a lot of Stamford residents think there is no homelessness in Stamford.

“It’s because they don’t see the homeless,” Jordan said, “because a lot of homeless people don’t want anyone to know they are homeless.”

The goal is that, one day, anyone with a new jacket will be able to keep it. The way to get there, Jordan said, “is to get everybody a home.” 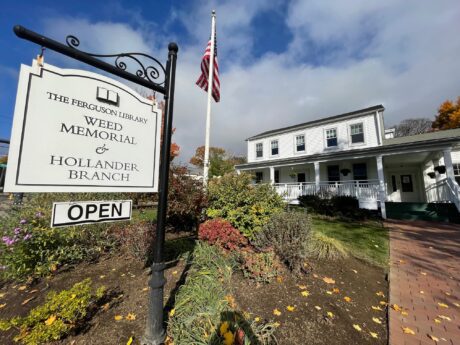