OLD LYME — “Monochrome,” a new show at Lyme Academy of Fine Arts, explores the range and potential of single-color palette works by selected contemporary artists, focusing on figurative pieces that push the boundaries of traditional techniques.

“We went with the theme of monochrome because we felt that what a lot of artists are doing with drawing is ultimately playing less with color and more with sort of abstract design,” Sokol said. “Just by making something monochromatic, you’re already separating it from our perception of reality as we perceive things, and so just that distinction already begins to create some sort of psychological impact.”

Sokol told CT Examiner that drawing was historically seen mostly as preparatory study for other works, but recently a number of artists have been exploring the potential of drawing as a finished piece — and that broader concept was encompassed into the show.

“Some are really opening the door of possibilities and using lots of different types of mixed media – just graphite or graphic mixed with charcoal, or enamel, or gouache along with charcoal or graphite or conte – but all are exploring that kind of relationship with that sort of abstraction that a monochrome palette provides.”

Sokol said that the artists are essentially using a traditional framework but they’re pushing the boundaries and experimenting.

“These works are not necessarily decorative, so it’s not meant to show the ‘prettiness’ of things.’ We wanted to bring in artists whose work is challenging in some ways and complex,” he said.

Gurpide said some of the artists in the show were colleagues through school or work, but others came through social media, especially Instagram.

“We’d never seen their work in person and with this exhibition it was a chance to bring the work together for us, our students and the public,” she said.

Some of the pieces are drawings, others are photographs or mixed media.

Michael Grimaldi, a well-known artist who has several pieces in the show, gave a lecture about his work and his influences on Friday afternoon at the Academy.

Grimaldi said he has long worked to find media that convey the darkest blacks in his monochrome works, using carbon chalk, acrylic paint, and “black 3.0” that looks like pressed charcoal. He uses encaustic, enamel, and a range of layering techniques to create his pieces.

But said he still likes to use charcoal, even if it the darkest black it can produce is a deep gray.

Artist Greg Shea, of New Haven, is a fine artist and photographer who has been using a 19th century process– shooting wet plate, collodion tintypes – for the past two years. He has two pieces in the show.

“As a fine artist who does drawings and paintings I like that [the tintype process] makes each piece a sort of unique object. There’s a lot of chaos built into the process from the chemicals and it’s sort of fraught with difficulties from temperature and humidity – and I like that,” he said.

Shea’s work references the techniques and style of 19th century photographer Julia Margaret Cameron, an artist he said he’s admired for at least 30 years. Shea said he began making these pieces after meeting a number of photographers who were using Cameron’s processes.

“I’ve always known it, but I didn’t realize the technique was still a viable thing – as soon as I learned that, I had to do it. I spent about a year reading and gathering equipment and chemicals and talking to people. And then I shot my first plate on July 5, 2020, so this is my COVID project,” he said. 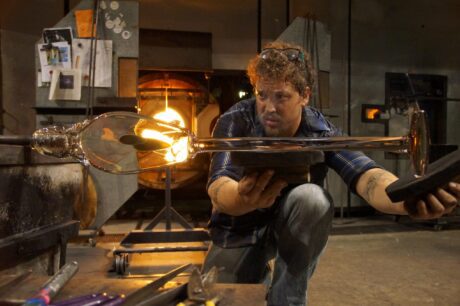 Legacy of Spiritualism Shines in ‘Radical Spirits’ at Hill-Stead Museum