NEW LONDON — Outside of Seafood Delights at 194 Bank St. — where Fat Boys used to be — the chef was turning jerk chicken, “Jamaican style,” on a smoky grill Thursday night.

The street was closed to traffic as pods of parents pushing strollers, bands of teenagers, and groups of  millennials and older folks strolled —  window shopping, reading menus and considering what they might order.

Restaurants had opened their doors and furnished the sidewalks with tables and chairs to serve customers. A variety of food trucks attracted long lines of people waiting to order, filling the street with conversation.

It was Eat in the Street, New London’s festival of food, art and music — and this month’s theme was “Locally Sourced.”

The weather was hot but comfortable.

By mid-evening, artists like Mia Moohr, who makes jewelry and has a store in Harris Place, said she had done very well selling her wares at her pop-up booth. “And the night is still young,” she said.

Out on the plaza, Sean Nelson, leader of the New London Big Band and a trombonist, was taking a break between sets. He said the crowds had been picking up as the night went along.

“We cover big band music, jazz, classic swing and some of my compositions – we play at the Social one Wednesday per month,” he said.

Meanwhile, the rhythmic music of the Hoolios, a Latin, Reggae, Texas folk and Zydeco band, drifted from the Art Park next to the Hygienic Gallery, while the New London Firefighters Pipes and Drums, marched and played along Bank Street and in city plaza.

Barbara Neff, founder of Neff Productions, is the organizer of the event, which is usually the first Thursday of the month from May to September.

“During Covid, Mayor Passero asked me to come up with another event that was social distanced to bring people into downtown – and so I came up with Eat in the Street where restaurants could take chairs and put them out front and we could social distance and people could walk around,” Neff told CT Examiner.

She said the idea was to bring food trucks, music and artisans into downtown New London, and that each festival would have a theme – it was Cinco de Mayo in May, and chocolate in June. Neff said she also runs Sailfest, so there was no Eat in the Street in July.

“We also brought in Noank Oysters – It’s not New London, but it’s by the water and we wanted to do something different,” said Neff. “ And very happily we bring in Foxwoods Resort and Casino because they are the sponsor of the fireworks for Eat in the Street as well as Sailfest.”

Neff partnered with local artist WORMO to create a scavenger hunt in which participants were tasked with finding stickers of local murals and posting pictures on their Instagram stories.

Along Bank Street, artists in front of the Annex painted canvases live, while at JBS Barber Spa stylists cut hair at a salon chair set up in the street.

The festival included Tox Brewing Company, which is based in New London and was pouring at the Oasis Pub on Bank Street.

“They brew the beer and they brought some merch,” said Sean Murray, manager of Oasis as well as the Social Bar and Kitchen, who was standing behind a table piled with T-shirts and beer openers embellished with the Tox frog logo.

Over at the Blue Duck Bar and Restaurant customers were eating at tables on the sidewalk. General manager Klemens Zachhuber said the new operation opened on June 27.

“It was a complete rebuild from the Brass Rail that was previously in the space,” he said.

Zachhuber said the restaurant serves its own Blue Duck Lager brewed by Thomas Hooker Brewing Company in Bloomfield, Conn. as well as local haddock in its fish and chips and fish sandwich.

Back at Seafood Delights, co-owner Tisha Henry, said the evening had been steadily busy with street traffic. The restaurant has been open since Mother’s Day and serves Caribbean and southern food, featuring seafood.

“We like the magnificent view of the water and it’s great to rebuild the community in downtown New London,” Henry said. 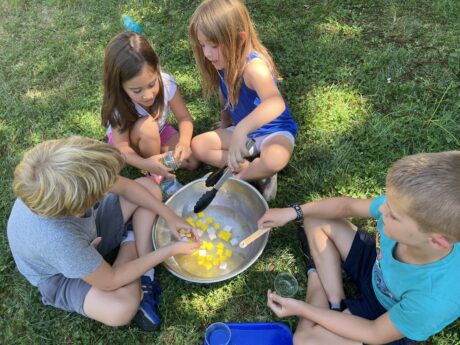