OLD LYME – For the last month, Connecticut Water has had to truck water into an Old Lyme beach community where high summer demand and an emerging drought threatened to overwhelm its small water system’s supply of water.

As drought persists in Connecticut, water is starting to  become an issue, especially in shoreline communities with increased demand from summer residents. Last week, Connecticut Water asked customers in Clinton, Guilford, Madison, Old Saybrook and Westbrook to use 15 percent less water – telling them their water system was quickly approaching a “drought watch.”

That pushed Connecticut water to start trucking water from the Guilford water system to Old Lyme to keep pace with demand – an effort that will continue as long as it’s needed, Connecticut Water spokesperson Dan Meaney said Meaney said that the Guilford system is the most efficient location for its Clinton-based field team to fill the tanker trucks it uses to bring water to Sound View, and the amount of water needed for the Sound View system with 733 connections is “very, very small” for the Guilford system with 14,757 connections –which serves customers from Guilford to Od Saybrook— despite the company requesting those towns conserve water.

Meaney said the company does not need permits to transfer water from one system to another, but does need to notify the Department of Public Health when it brings water into any of its systems.

Serving the shoreline is a unique challenge in the summer, Meaney said. New rates approved for Connecticut Water last year include a new “conservation rate,” where customers pay a higher price for all the water they use in excess of 18,000 gallons per quarter, but that may not make as much of an impact in beach communities.

“There is an influx of seasonal customers during the Summer months – and some of those units are rented by those who may not be aware of our conservation requests – or who are not responsible for the water bill and therefore there is no incentive to conserve,” Meaney said.

Meaney said the company has to truck in water to supplement some of its smaller water systems with limited resources “on occasion.” Connecticut Water consists of more than 60 disconnected water systems ranging in size from 15 to 40,000 customers, and each with their own sources of water.

In Sound View, Connecticut Water had to truck in water in 2019, and occasionally in other years with hot, dry summers and high customer demands, Meaney said.

The company will continue trucking in water to Sound View as long as it needs to in order to meet customer demands, Meaney said. But customers will need to use less for that to happen, Meaney said – either through active conservation or enough rain to get customers to reduce their outdoor water use and lawn watering.

Along the shoreline, rain would help replenish the company’s reservoirs, and get people to use less water outside, Meaney said. But the best way to preserve the water supply and avoid mandatory water conservation orders is for people to stop using water outdoors – especially watering their lawns at a time when the entire state is in a declared stage 2 drought.

“Our requests are voluntary and are aimed at curbing outdoor water use during this dry period,” Meaney said. “We do, and will continue to, adjust and move water to meet domestic water demands. Tankering is not sustainable solution, but it is one available to periods of very high demand.”

No widespread shortages… yet

When the Connecticut Interagency Drought Workgroup declared a stage 2 drought statewide, drinking water reservoirs around the state were near normal levels when they were most recently reported in late June and early July.

“There’s no real concern about that at this point, unless we don’t get much rain going into the future,” Steve Harkey with the Department of Public Health said, adding that the department would continue to monitor monthly reports on the situation.

But a lack of rain throughout the spring and early summer, leading to lower groundwater levels and stream flows, were enough to move the entire state into a stage 2 drought designation. It’s the second of five steps in the state’s drought response, and it effectively puts the state on notice of a developing drought that has the potential to impact water supplies.

Though the drought hasn’t caused any widespread issues with available water, DEEP reported concerns with low stream flows to the workgroup. In East Lyme, “in the realm of” 30,000 “young-of-the-year” Alewives died on July 7 when a brook dried up downstream of Bride Lake, DEEP reported.

And in the Farmington River and its West Branch, DEEP has been releasing water from fisheries pools to bolster “well below typical” flows on the river.

The stage 2 drought declaration came with a request for residents and businesses across the state to limit their water usage to prevent more serious issues – including reducing outdoor irrigation, stopping lawn and garden watering, and fixing any leaky plumbing.

The declaration also urged people who depend on private wells and fire or irrigation ponds to be mindful of local drought conditions, especially if they have been affected by previous droughts. The Department of Public Health asked local health departments to report weekly on the number of private well permits they have issued for wells impacted by drought.

Stephen Mansfield, director of the Ledge Light Health District in New London County, said that in addition to Connecticut Water trucking in water to Sound View, the department has had a few well permits for people drilling new wells because their existing, shallow wells had gone dry.

Other health departments, including Middletown, Essex, Connecticut River Area Health District and Uncas Health District all said they did not yet have any permits to replace dry wells this summer.

Patrick McCormack, director of the Uncas Health District that covers 11 municipalities in the Norwich area, said that when people’s wells run dry, they will often try to just live with the situation for as long as they can to see if it resolves itself, before they call about options like drilling a new or deeper well.

McCormack also said that upgrades to well construction may have reduced some of the issues people had in the past with wells running dry. Modern drilled wells go deeper into the ground, and are much less likely to run dry than shallow dug wells – which are typically what gie people issues during a drought, he said.

“A number of people over the years have been aware of the condition of their wells and upgraded them accordingly,” McCormack said. “And real estate transactions with certain loans are requiring outdated wells to be upgraded at the sale, so I think that’s made a significant dent in the number of outdated wells in our communities.”

McCormack said that the Department of Public Health offers good recommendations for what well users should do in times of drought or low precipitation, and that he often references their publication when speaking to people with concerns about their wells.

“The one thing we want to remind folks is that it certainly could be something else,” McCormack said. “So it is good that somebody comes out and takes a look at it, because if your pump went and you’re concerned that it’s because there’s no water, it may be something you can repair. You may actually have water.”

This story was edited to include additional comments by Meaney. 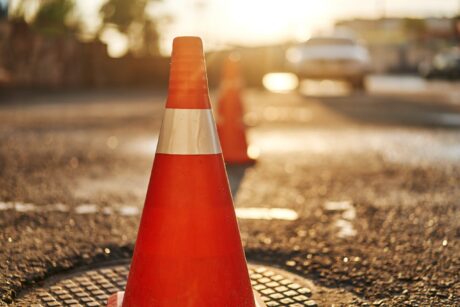 After Excavating Roads 15 Times in 4 Years for Aging Pipes, Ledyard Warns of the Inevitable