NEW CANAAN — Artist Olga Pilyuhina, a traditional tapestry artist who lives in the eastern part of Ukraine, has had to keep her tapestries hidden in four different places to protect them from Russian shelling.

But she has managed to ship some of them out of the country to the U.S., where they will be exhibited for the first time at the Carriage Barn Arts Center in New Canaan.

Her tapestries are characterized by bright colors and animals — a unicorn standing in a field of plants, birds in flight, flowers curving up toward the sky, an apple orchard and a tapestry featuring a scene of the Last Supper that she finished last year.

Pilyuhina has been involved in tapestry making her whole life – she grew up in a creative family and in the town where she was raised, Reshetylivka, tapestry making was a traditional craft. She has displayed her work across Ukraine and in Europe, and was recognized last year as an Honored Master of Decorative Arts of Ukraine by the Ukrainian President. She also teaches at Poltava Polytechnic University.

Her tapestries start out as a pencil sketch, which she then turns into a full-size color model of what the tapestry will eventually look like. She dyes the wool threads into different colors, and then commences the process of weaving the design.

Pilyuhina wrote in an article that her tapestries reflect life, generational connections, and how human beings fit into the greater society.

“My tapestries are reflections on history, culture, traditions and their development; they are about the present, past and future; about who we are and where we are going; about the desire of the human soul to know the truth, self-improvement; love that inspires; love for the native land and admiration for the world around us, intelligently created and filled with love,” she wrote.

But Pilyuhina is concerned about the future of the art form, and how to pass on her skills to young people.

“In today’s dark times for Ukraine, the continuity of teaching and practice is hard to sustain. Sheep farming and yarn production are also threatened. People’s thoughts are preoccupied with survival rather than art. Even before the war, the state funding for the arts was diminishing with each passing year. Now, when everything is collapsing, Ukraine risks losing its culture and traditions,” Pilyuhina wrote.

Still, Pilyunhina’s artwork continues to reflect hope. A tapestry she completed this year, which features a unicorn standing in a field of plants with a sun in the background, is titled “Birth of the Dawn.”

“Even after the darkest night, dawn always comes,” Pilyunhina wrote on Facebook below a photo of the tapestry.

The exhibit will be open from July 16 through 30 at the Carriage Barn Arts Center. There will be an opening reception on Sunday, July 17 from 3-5 p.m.

In addition to the work in the exhibit, additional pieces of Pilyunhina’s work will available for order on the gallery’s website. 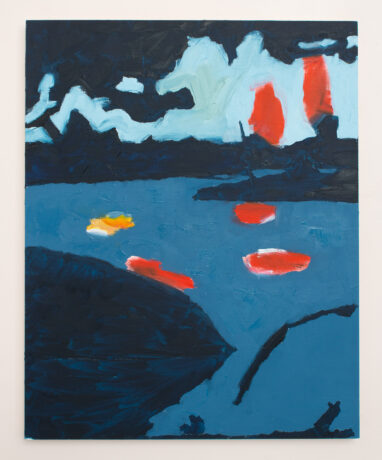