How many teenagers does it take to raise a sail?

Late on Thursday morning, on a sailboat floating in Niantic Bay, four boys are hovering around a set of ropes and a crank, trying to figure it out.

“Is the top of the main halyard connected to the head of the sail?” interjects Sara Beth Bouchard, one of the instructors. “You’re not going to pull it up if it’s under the winch.”

It’s a busy day on the water.  The Larry White regatta, a race drawing about 100 young people from across southeastern Connecticut is being hosted by the Niantic Bay Yacht Club.

But the boys on the sailboat — christened the “Effie” — are trying something different: they are learning how to tie knots, how to raise sails, how to gauge the wind, and picking up general advice for how to survive long periods at sea.

One of the teens, 15-year-old Max Savin, a student at the Williams School, said he wants to join the Coast Guard. Learning basic boat maintenance and navigational techniques — like how to use a compass — are things he sees as potentially valuable for his future ambitions.

Savin said he loves the experience of being out on the water, smelling the sea breeze and hearing the waves. He also said that he felt working in the Coast Guard, where he’d be doing things like making sure drugs didn’t enter the country, was preferable to being in the Navy or the Army.

“To me it’s more important than going out and killing other people,” he said, adding that additional killing tends to “cause more war.”

Another teenager, 14-year-old Logan Tomarchio, who goes to Norwich Tech and said he’s interested in working in plumbing, said he was used to going out on boats with his father.

“Last year, me and my dad, we just sailed for hours,” said Tomarchio, adding that it was both hands-on and peaceful.

Pam Woodruff, the program director, said she created the program for Niantic using a combination of STEM and math lessons and curriculum from U.S. Sail — and she said other clubs in the area have similar programs. Woodruff, a teacher in Manchester’s Alternative Education program, said the summer program was an alternative for children who didn’t want to race and was more “accessible” for children that don’t have any sailing background or knowledge.

She said that at least half of the students who were enrolled in the program had never been on boats before.

This was the case for Troi Trickett, a freshman at Waterford High School.

“It got me out of the house and just seemed interesting,” said Trickett, who hopes to become a carpenter.

Others have sailed for years but shied away from the competitive aspect of sailing.

“I feel like the water’s supposed to be calming,” said 13-year-old Nick Brothers, who started sailing when he was six or seven years old.

Ken Shluger, the president of the Niantic Bay Sailing Academy, said a program like adventures, which is more focused on “team effort” helps stave off some of the burnout he’s seen in young sailors.

The first week, Woodruff said, the kids made anemometers and wind indicators. Last week, they were given a single propane grill and told they had to use it to cook a meal — a reflection of the small kitchen space in a typical sailboat. The teens made pancakes and Thai Stew. They have also made eco-friendly reusable wraps out of fabric and beeswax, and they built boats out of clay and aluminum to learn about buoyancy.

“We’re trying to get them a lot more of the background that good sailors have,” she said.

At around 11, the boys pile into a launch and pilot the small boat out to the Effie.

The boys will be spending most of the afternoon out on the sea, and they’ve brought provisions — which, for fourteen-year-old boys, mean Brisk Iced Tea and bags of Doritos.

Once onboard, the first task of the day is to get the sail up. It takes a little finessing.

“Do NOT sky anything. Please. Do not sky anything,” Bouchard tells them. She explains that “skying” is pulling up the rope without the sail being fully attached. If that happens, she said, they won’t be able to get the rope to come back down.

After the sail is raised successfully, the boys sit down and start practicing knot-tying with some of the loose ropes. When Bouchard sees Nick Brothers complete a bowlin, one of the more complicated knots but particularly useful for securing things on boats, she pumps her fist.

Bouchard, a junior studying chemistry and microbiology at Wesleyan University, said that sailing was, like many sports, historically dominated by men. But she said that the sport actually has an advantage for women — it doesn’t require excessive physical strength.

Bouchard said that she’d like to see more girls in the program. Their single female participant was competing in the regatta that day, leaving them with an all-male crew.

Bouchard said that the day’s itinerary will be a discussion about trash, and how long it takes to break down. She’s brought along samples of things you might find in the ocean — a plastic fork, glass bottles, a biodegradable plastic bag … and the now ubiquitous surgical mask.

After that, they might practice  “man overboard” drills. If they are good, she said, she’ll let them be the man overboard. It’s hot. They could use a swim. Finally, she’s brought along two books of murder mysteries. She’s picked out all the boat-related ones.

The boat’s owner, Robert Shook, is helping the teens get the sails up and steer the boat. He shows them how to work the throttle for the motor. They need it today — the wind is quiet.

Shook makes his living working as a captain on a private yacht, performing maintenance on the boat and sailing it back and forth from the East Coast to different Caribbean Islands. New York to Bermuda takes four days, he said. Bermuda to the U.S. Virgin Islands, seven.

Shook has been sailing since he was seven, and he credits the sport with requiring “mental toughness.”

“These kids are as young as eight years old and they are going out on their own,” he said. “Most of any toughness and determination I have come from this.”

He added that programs like this show children opportunities they might not have thought about for careers in the government or the private sector that require nautical skills — careers that for a long time have been closed off and accessible only to the privileged. Shook referred to it as an “old boys club.”

Other potential careers include driving tankers or working in commercial shipping.

“All the little tugs … they all need captains,” he said, adding that those jobs offered good benefits and time off.

There’s also the historic connection to exploration. Woodruff said that she’s amazed by the Polynesian explorers who went out on enormous stretches of water without any land in sight and had to navigate.

“People have been sailing for centuries,” said Woodruff, adding that it gave them “that sense of self-sufficiency and exploration.”

Moana, the Polynesian protagonist of the 2016 Disney movie of the same name, and who is taught to sail by the god Maui, is referenced by both Woodruff and Bouchard during the day. Back on the boat, Bouchard threatens to put on her kid-friendly sailing playlist, which, she said, features a mix of Kermit the Frog, the AWOLNATION song “Sail” and background music from Spongebob Squarepants. It used to include tracks from Moana, she said, but she took those out.

“It started getting excessive with the kids,” she admitted.

As the teens begged her not to put on the playlist, the boat moved forward toward the race course. Shook helped steer around the little sailboats competing in the regatta, prompting a heated discussion over who would be culpable in a legal lawsuit if the boats collided.

They maneuvered the Effie without incident through the circling competitors. On the race course, horns begin to blow, calling the fleet of tiny boats with nearly identical sails to line up behind a red buoy, jockeying for the best position.

But the crew of Effie heads off on its own, steering toward the horizon. 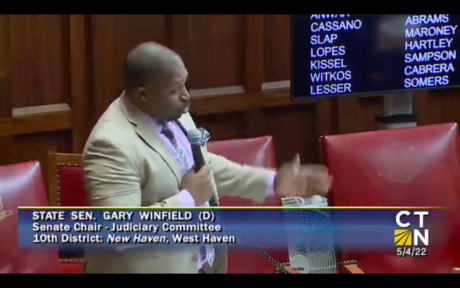