MONTVILLE – On Tuesday night, the Montville Planning and Zoning Commission greenlighted plans for Gateway to expand its existing road salt business across eastern Connecticut by redeveloping a vacant property on the Thames River.

Gateway Terminal attorney Harry Heller told the commission that the New-Haven-based port operator intends to have the road salt distribution facility up and running before winter. The new facility will fill a void left when road salt supplier DRVN was pushed off the New London State Pier to make way for its redevelopment into an offshore wind hub – leaving the area without a local supplier of salt.

A road salt business is allowed “as of right” in the industrial-zoned properties, and the commission voted 7-0 to approve Gateway’s site plan for the project.

Heller said the site has been used for industrial purposes for “well over 100 years” – most recently the AES Thames Cogeneration power plant and the WestRock corrugated packaging plant, both out-of-business and demolished.

Montville Town Planner Liz Burdick told CT Examiner that this is the first effort to redevelop the properties that she is aware of since those two businesses closed. Gateway is leasing the properties from Uncasville, LLC, a Missouri-based holding company registered to St. Louis developer Tom Roberts.

“This is an intermodal facility, it is intended for the movement of goods into the region, and also potentially exporting goods out of the region,” Heller said. “It has deep water access for barges. It has the former Central Vermont – I think now Genesee & Wyoming – railroad spur which goes to Worcester and New London, and has the potential for improving the site to increase the intermodal capacity of the site.”

The first phase of the project will be to excavate the area to the southwest of where Depot Road intersects with the railroad in order to crest a 2.3-acre concrete pad where up to about 120,000 tons of road salt will be stored.

Gateway’s plan is to keep a concrete pier that was previously built on the river to handle shipments of coal for the power plant, and use the pier to bring in shipments of salt, Heller said. The company will install a conveyor belt to unload salt from barges docked at the pier, and will then be loaded onto trucks that will take the salt over the railroad tracks to the storage area, he said.

Trucks will access the site via Depot Road, be loaded with road salt, cross a set of scales, then return by way of Depot Road to Route 32 or Interstate 395, Heller said. According to a traffic study by Hesketh & Associates, the site would expect about 25 trips an hour during morning and afternoon peaks in the winter, and about 65 trips an hour at the peak in the days leading up to a winter storm.

Traffic engineer Scott Hesketh said that he expected almost all of the trucks would leave via I-395, and that about 10 percent would use Route 32, mainly trucks serving Montville or neighboring towns.

Heller said that phase two of developing the site would begin with the removal of material excavated in phase one which will be used to fill the properties on the other side of the railroad track next to the river.

The company would also need to bring in additional fill to bring the entire site up to grade, and to prepare for future commercial or industrial use, Heller said. Phase two also includes new rail spurs to “accommodate the transfer of bulk construction materials from rail to barge and from barge to rail,” the Gateway proposal said.

The commission was originally scheduled to hear the application later this month, but Gateway requested the special meeting on Tuesday night so that it could start work sooner in order to be ready in time for the winter season.

“We do have a tight timeline on this project in order to be ready to provide salt to the region,” Heller said. “So even though it’s only a couple weeks, a couple weeks makes a material difference in our construction.”

The road salt will be needed in eastern Connecticut, where snow removal companies were forced to drive their trucks an hour to either Providence or New Haven last winter, at the cost of hundreds of dollars a day.

Rick Whittle, owner of Mystic-based Allied Snow Removal said he was hopeful that having a road salt distributor back in the area would resolve some of the logistical issues and costs that he had to manage with DRVN out of New London last winter. But he said it all comes down to the cost and how streamlined the line is in Montville.

“If they charge more than what I can currently buy in Providence, it doesn’t help me,” Whittle said. “Providence, I can get in and out fairly quickly, so I need the pricing to be competitive with everybody else. And no one knows what that’s going to be since supposedly shipping rates are through the roof.”

The location in Montville could potentially be a great fit for Allied Snow Removal, which does a lot of work in Montville, Norwich and the surrounding towns, he said. But it all comes down to cost and ease of access.

Contractors have complained of long lines and a slow process picking up salt from Gateway in New Haven in the past, and Whittle said he hopes the Montville location will operate more smoothly.

“So I need competitive pricing, and then I need a good order flow to get trucks in and out of there,” Whittle said. “But instead of running to New Haven or Providence, it could potentially be a home run.”

The project comes as another major redevelopment is being proposed almost directly across the Thames River in Gales Ferry, where Cashman Dredging and Marine Contracting is proposing to redevelop the former Dow Chemical plant into a hub for its dredging business in New York and Connecticut.

That project has drawn scrutiny from residents of Gales Ferry, who are concerned with heavy truck traffic on Route 12 – the main artery through the community – and on the Thames River and railway, with the contents of dredged materials that would be handled at the proposed facility, and with potential additional uses on the site.
An informational meeting on that project had to be rescheduled from its original June date after residents overflowed a meeting room at the Ledyard Public Library, and will now be held Monday at 6:30 p.m. at Ledyard Middle School. 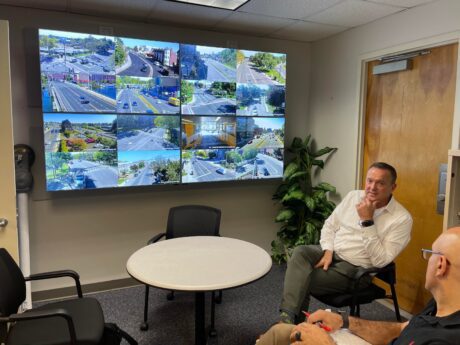