It could star in a botanical horror film.

It grows fast; sometimes 4 inches in a single summer day.

And it’s strong; it can push through concrete and asphalt and break through foundations and walls.

Most scary of all, it can multiply, and two ways – by its prolific root system and by throwing seeds.

It’s nearly impossible to destroy. In fact, if you hack its roots you can help it spread, because tiny root fragments left in the soil will grow new plants.

It’s not native to the United States, though it’s been here for more than a century. And it has surely invaded.

This spring, people are really noticing it.

In North Stamford, the city’s woodsy neighborhood north of the Merritt Parkway, Japanese knotweed reaches over the roadsides, forcing pedestrians and bicyclists into the lanes of traffic. It obstructs the sight of motorists trying to pull onto a road.

As you drive, it brushes the sides of your car.

City Rep. Don Mays calls it “the scourge of North Stamford,” his district.

“We’re reaching the point now where it’s creating a safety problem,” Mays said. “There’s no good way to keep it in check. It continues to get worse.”

He tells his constituents to use the city’s online request system so a crew will come out and cut the plants back. But spot-clearing is no match for Japanese knotweed, Mays said.

In the Ridges, a less woodsy neighborhood, Robert Andrasi saw something growing – and growing – at the end of his street. He had seen it before, so he took a photo and ran it through one of those plant-identifier apps on his cellphone.

It came up Japanese knotweed. Then Andrasi saw it in his yard.

“I have some flowers, ground phlox, and it’s growing through that,” he said. “It’s growing in sunny spots in the flower beds.”

He keeps pulling it out.

“You go to bed and wake up the next day and it has grown so much, you think, ‘Where did that come from?’” Andrasi said.

He posted something about it on a social media site and learned he was far from alone.

Homeowners “should be on the lookout for this plant and eradicate it wherever they can,” a Stamford man warned.

“A large part of my backyard has been completely consumed by these weeds,” reported a Norwalk man.

“After years of unsuccessful treatment with herbicides and covering the area with dark cloth, the only alternative was to have the landscaper come in with a backhoe and excavate the area and remove it from the property,” a Greenwich woman wrote.

“It took me years to get rid of the ones that invaded my yard and destroyed my retaining walls,” wrote a Stamford woman. “Don’t fall for its pretty heart-shaped leaves like I did the first year. BIG mistake.”

“It’s very much like bamboo,” he said. “It spreads underground by rhizomes, which are roots that grow sideways. It spreads so easily. It will grow pretty much everywhere.”

Worse, “there’s not much that can be done to control it,” Belletzkie said.

“The best way is to cut it to the ground, put a black tarp over it, and put 3 to 4 inches of wood chips over that. It’s about the only solution I know of to keep it at bay, and it might not work,” he said. “It’s very unlikely you will find a habitat in Connecticut where it will not grow well.”

Or a habitat in the United States, apparently.

In Wisconsin, the Department of Natural Resources posts an online guide for removing Japanese knotweed, which it encourages residents to do because it “threatens our community.”

The plant “is quick to shade out native species and garden cultivars. It takes over roadsides, residences and community recreation areas, threatens our stream banks and increases fire danger,” the department writes.

It emerges in early spring and quickly forms dense clumps. They can grow as tall as 9 feet, with rhizome roots that can stretch 15 feet to 18 feet, according to Indiana’s website. It crowds out native plants and, once established, is very difficult to eradicate.

It can grow in all kinds of soil, in heat and in cold, and can equally tolerate drought and floods, Indiana reports.

Japanese knotweed was introduced from Japan to Great Britain as an ornamental plant in 1825, and from there to North America in the 1890s. In that time it has spread across the United States, from the Northeast to California, Indiana reports.

The powerful weed killer Roundup doesn’t kill it, Don Mays said. Some of his neighbors have poured boiling water on it, but “that’s not really effective,” he said.

“A landscaper told me that if you continue to cut it back, the lack of growth will cause it to eventually die, but it will take years,” Mays said. “I have it on my property. I put massive tarps over it. It has helped, but if just a little bit of sunlight gets in the spaces where the tarps join, the knotweed will jump through it.” 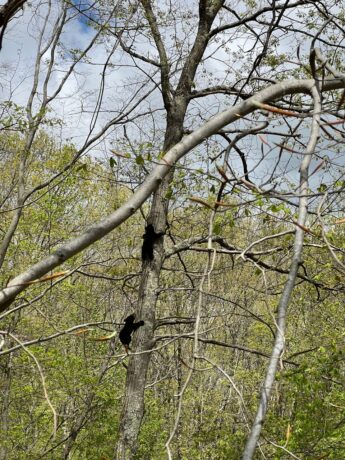