OLD SAYBROOK — An attorney for the town has said that the Police Commission has “overstepped its bounds” by changing its policies related to correspondence, public comment and citizen complaints directed to the commission, and said that these policies should be reversed immediately.

First Selectman Carl Fortuna told CT Examiner that after the commission voted on the new by-laws, he contacted the town’s liability carrier out of concern that the town could be liable for the commissioner’s decision to not follow the advice of the town attorney.

“There is no need on my part to summarize the comments of the letter from Attorney Tallberg. His conclusion on each of the newly voted by-laws is clear and concise: the police commission has overstepped its authority in changing these by-laws, the by-law changes should be rescinded and the by-laws that existed prior to these amendments should be reinstated immediately,” Fortuna wrote in a June 8 letter addressed to the Police Commission.

Town attorney Michael Cronin told the commission in a written opinion in March that changing the bylaw on civilian complaints to anything that doesn’t immediately notify the department about a complaint against an officer could open the town to legal liability if the complaint isn’t acted on.

The bylaw passed on a 5-2 party-line vote at its tense April 25 meeting, despite Cronin’s warning – with the two Republican members of the commission voting against, saying they were concerned with going against the advice of the town attorney.

At the same meeting, the commission also approved changes to two other by-laws — one that has to do with public comment and another saying that police commissioners must recuse themselves from disciplinary hearings for officers if they have already demonstrated “bias” against that officer or prejudged the issue.

In his opinion, Tallberg said Cronin’s advice to the commission was well-reasoned, and said the commission should take “prompt action” to reverse the changes it made to the bylaws at that April meeting – including the rule governing correspondence, and the rule that bars speakers at commission meetings from identifying individual Police Department employees in their remarks, which Tallberg said “reinforces the flawed belief of Mr. Wilcox,” that the commission has the authority to accept and process complaints about individual officers.

“It is the Police Department, not the Police Commission, which must process and investigate all complaints regarding the conduct of law enforcement personnel,” Tallberg said. “The proposed By-Law change muddies the waters and no longer requires that complaints related to personnel matters be forwarded to the Chief.”

Tallberg said the commission should also not approve another rule it was considering, which would have given the commission more options for addressing complaints against officers, including forwarding the complaint to the police department, contracting an independent investigator, or forwarding it to state or federal authorities.

Tallberg wrote that Wilcox deviated from the town charter by presenting his own legal analysis after receiving an opinion from the town attorney that he didn’t agree with, in order to convince commissioners to vote for the changes despite Cronin’s warning.

As a result, the commission should reverse the changes it made to the bylaws in April, and should not approve the fourth proposed bylaw change, Tallberg wrote.

Reached by phone on Friday, Police Commission Chair Alfred “Chub” Wilcox said it was not his goal to “make the town feel uncomfortable about the actions of its police commission.”

Wilcox said that he still believed that his original understanding of the police commission by-laws were correct. He said that he believed that when the legislature adopted amendments requiring police departments to adopt the minimal recommended guidelines around citizen complaint procedures, the aim was to require police departments to respond to civilian complaints properly.

“It strikes me very ironic that you would interpret that as constraining police commissions from exercising oversight of police departments. It’s just backwards,” said Wilcox.

In his letter to the police commission, Fortuna said that he expected the commission to “act accordingly” in response to Tallberg’s comments, at their next meeting. The commission is scheduled to have its next regular meeting on Monday, June 27.

Wilcox said he planned to invite Tallberg to attend the next police commission meeting to answer questions. 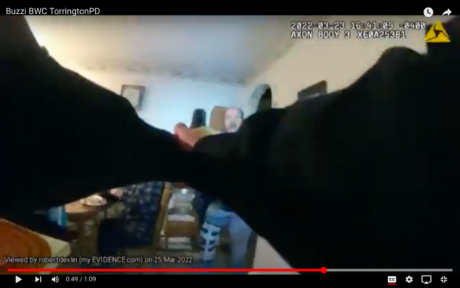