OLD LYME — Two painters with roots in the Connecticut Valley, who also share a strong sense of color, will exhibit together in “Where They Began,” a show at the Cooley Gallery guest-curated by artist Christian Brechneff, opening May 26.

“Morteza Khakshoor is almost like a Matisse, with a motif that tells a story with color and with figures. Jasper Goodrich is very bold, he’s more abstract, he is more the colorist,” said Brechneff of the two artists he chose for the show.

Khakshoor was born in Iran and came to the U.S. in 2010. He earned his BFA in 2015 from Lyme Academy College of Fine Arts and worked in his senior year as Brechneff’s assistant. He went on to receive his MFA from Ohio State University. A resident of Southern California, he has been exhibiting work internationally since 2011.

Brechneff, who has exhibited at the Cooley Gallery many times, said the two artists are quite different in style and content.

“Well, Morteza is definitely quite political. Being an Iranian and given his past and that he cannot ever go back to his country and he cannot be with his family, it’s a very, very powerful kind of statement that comes through his work again and again. He is very provocative.”

“I envision Morteza and Jasper ‘talking’ to each other. I would like them to create a communication, a dialog that the viewer can walk through and talk to as well. I envision that the viewer is sort of enchanted and seduced by these two artists who are very different, but they do have similarities.”

Gallery owner Jeff Cooley said he was thrilled when Brechneff pitched the idea for the show.

“This region of Connecticut has a long history of supporting artists and their work. We are thrilled to be able to play a small role in Christian’s vision and in keeping this tradition alive,” said Cooley in a release. “We are known as a gallery that mostly shows historic art from Old Lyme but we’ve gone outside those perimeters from time to time. I think it’s important to look outside the usual, especially if there’s a logical thread. Christian’s enthusiasm for these two artists was notable and it meant a lot to us to share his vision.”

Brechneff said he wanted to bring together two artists who could enhance the community, especially after the isolation of the pandemic.

“This is about the viewers. I really wanted to give this community a shot in the arm. And what we ended up choosing is still edgy and I think provocative, and it’s also very beautiful.” 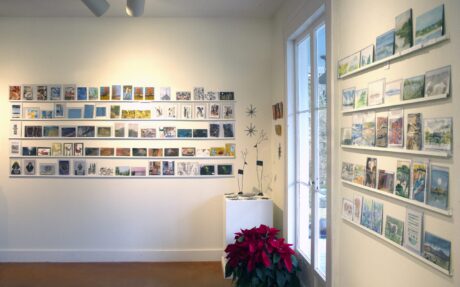