For the second consecutive year, Eversource reported profits of more than $1.2 billion – and those profits for 2021 would have been even higher if the company hadn’t been penalized for its response to Tropical Storm Isaias in 2020.

The company reported $9.86 billion in total operating revenues in 2021 – of which $3.6 billion came from Connecticut Light & Power, the Eversource subsidiary that provides electric service to 1.2 million customers in Connecticut. The company’s total revenues were up from $8.9 billion in 2020 and $8.5 billion in 2019, according to the company’s annual report to the U.S. Securities and Exchange Commission.

Eversource said a settlement it reached with Gov. Ned Lamont and Attorney General William Tong in October, to resolve the state regulator’s investigation into the electric utility’s handling of the damaging August 2020 storm, cost the company $86.1 million in 2021.

Without that cost, and $23.6 million it spent on its acquisition of Columbia Gas of Massachusetts, the company would have made $1.33 billion in 2021, according to a report Eversource made to its investors.

Revenues from newly-acquired Columbia Gas – which serves about 330,000 customers across 60 towns in western Massachusetts – drove a $69 million (51 percent) increase in Eversource’s total natural gas distribution profit between 2020 and 2021. The company’s natural gas profits have now more than doubled from 2019, when the company earned $96.2 million on its gas distribution business.

Not counting the cost of the Isaias settlement, Eversource reported earning $12.2 million (2.24 percent) more in profit from electric distribution in 2021 than it did in 2020 – a total of $556.2 million. The company said higher distribution revenues were “partially offset” by higher operations and maintenance costs, depreciation, property taxes and interest.

Eversource spent over $1.1 billion on the transmission system in 2021, mostly replacing “obsolete equipment,” CFO Phil Lembo said in a call with analysts on Thursday. The higher distribution revenues are mainly from the company’s investments to improve reliability and resiliency of its distribution system, Lembo said.

The company expects to spend another $1.1 billion on transmission in 2022, and $18.1 billion between 2022 and 2026, he said. The company expects to spend nearly $400 million in distribution in the same time period on grid modernization and electric vehicle charging in Massachusetts, but isn’t assuming similar expenses in Connecticut and New Hampshire at this time, Lembo said.

Joe Nolan – who replaced Judge as president and CEO on May 5 after previously serving as the company’s executive vice president of customer and corporate relations – was the company’s second-highest paid executive in 2021, earning about $6.47 million in total compensation, including pension gains.

The compensation of Steve Sullivan, who the company named the first president of Connecticut operations in December as part of the Isaias settlement, was not included in the 2021 filing. 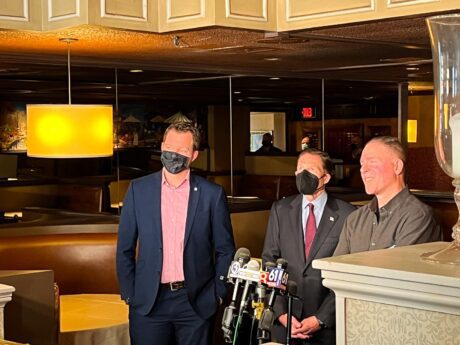