PLANTSVILLE — In his speech to members of the Connecticut Council of Small Towns on Tuesday, Gov. Ned Lamont began with the federal infrastructure bill, which he said could be transformative for the state.

“We’ve got 100 year old bridges and roads. We really need this going forward,” Lamont said. “[But] it’s about more than roads and bridges, it’s also about broadband. It’s about making sure that each and every one of those small towns has access, making sure you can do everything for Brooklyn, Connecticut, you can do from Brooklyn, New York. It’s making sure we have free WiFi in the town squares.”

Lamont spoke in support of a number of priorities on the 2022 legislative agenda of the council, known as COST, which represents 115 towns with a population of less than 35,000 and works to give Connecticut’s smaller communities a voice in the legislative process.

Two priorities this year include investment in critical infrastructure and efforts to meet the broadband needs of underserved areas.

Lamont emphasized that it was important for Connecticut to be ready — at the head of the line — with projects that can receive federal funding.

“A lot of this stuff is competitive. A lot of it is first come first serve and I’ve really worked hard. I think we got some additional monies in the budget to help you with the planning, help you with the engineering,” he said. “I want to be the first one down there in Washington saying these are the first 10 projects we have — and that can make an extraordinary difference.”

Lamont said he has worked hard to keep the state’s rainy day fund intact in order to help the state to keep taxes level and avoid cuts in municipal and educational aid — reflecting another of COST’s priorities, to preserve state aid to towns to reduce over reliance on property taxes for funding critical services.

Lamont said the state will receive about a billion federal dollars for infrastructure, but pointed out that the money often required a match from the state as well as the towns.

“I just got to tell you that all this money comes with strings attached. I’ve got to put up, say, 20% of my copay. We’re getting a billion dollars a year for infrastructure — we still have to be able to put up our $200 million a year on that,” he said, “To the degree to which we’re going to be going after aggressively these competitive grants that I referenced before — a lot of that’s in broadband, a lot of that’s in water treatment —  I’ll probably be asking you to come in alongside of us. So you know, if we put up 20%, if you put up 10%, we’re that much more likely to be front of line and get the federal support that we need.”

Touching on COST’s priority to strengthen “efforts to address public health and safety issues, including juvenile crime, mental health, and opioid abuse,” Lamont said he was aware of the extra stress COVID had added to the lives of children and adults.

Lamont said his budget included hundreds of new community police for the towns and additional resources for judges, prosecutors and district attorneys.

“Justice delayed is justice denied. I wanted to pick up that pace there,” he said, adding that his agenda also included more stringent gun legislation.

Concerning another COST priority — to ramp up efforts to tackle Connecticut’s solid waste management issues by expanding recycling efforts and improving materials management — Lamont said that he was looking at long term solutions for trash disposal, including increased food waste recycling and shipping trash out of state instead of sending it to the MIRA plant in Hartford.

“I don’t think that’s the future of the state — at least the MIRA energy plant creates a lot of waste, particulates, a lot of asthma, environmental justice — so I think it’s time to move on from that,” he said.

In an email to CT Examiner Tuesday night, Republican Bob Stefanowski, who announced his candidacy for governor in January, said that Lamont’s comments to COST members were inconsistent with his previous messages about the budget.

“Not even two weeks ago the State touted a $2.2 billion budget surplus and in the same week the Governor told local leaders his administration couldn’t make good on $22.6 million in funding for local grants,” Stefanowski said.

Stefanowski said it was these kinds of broken promises that make it hard for towns, businesses and households across the state to plan and budget.

“If the Governor was serious about addressing property taxes, he wouldn’t have waited until eight months before the Election to try and make good on his 2018 campaign promise, and he wouldn’t be breaking promises on local funding,” Stefanowski said.

“As usual, the Governor’s proposals are a day late and a dollar short. He is a long way away from undoing the damage caused to our communities, and to state and local police departments across Connecticut over his last two years in office,” Stefanowski said.

Stefanowski noted that the COST legislative agenda provided opportunities for collaboration between the state and towns.

“The COST agenda reflects opportunities for the State to be a stronger, more trusted partner to our local leaders and to embrace a bottom-up approach to better government,” he said. 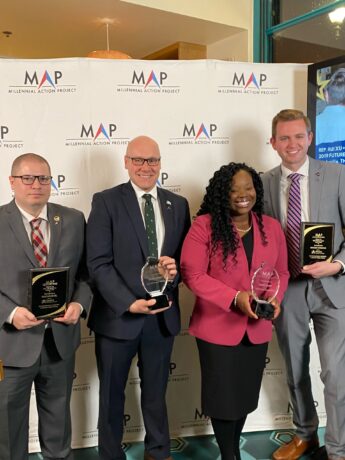