Across Connecticut, there are currently 406 staffing vacancies, with nearly 400 correctional workers becoming eligible for retirement in 2022, a looming retirement cliff that officers warn could bring the prison system to a breaking point.

“This is a crisis waiting to happen,” said Mike Vargo, president of AFSCME Local 1565, a union representing correctional staff across the state. “Shortages are risky for staff. There is more chance for injury on the job and volatile situations to break out.”

“The Lamont administration believes it can do more with less,” said Larry Dorman, public affairs coordinator for Council 4 AFSCME. “There clearly needs to be more hiring of frontline prison employees, and the state has the resources to do that.”

The Governor’s Office did not respond to a request for comment, but Karen Martucci, director of external affairs for the Department of Correction, said the current staffing percentages were not outside of the norm, and that the department had a plan in place for looming retirements.

“I am confident with the recruitment and hiring plan in place to keep up with the rate of retirements,” said Department of Correction Commissioner Angel Quiros. “Maintaining safe staffing levels has always been and will continue to be a priority of this administration.”

“For correctional staff, this jump in overtime is more than just a statistic,” said Collin Provost, a correctional officer at MacDougall-Walker Correctional Institution in Suffield. “We feel the burnout, the exhaustion, and the strain on our backs with every double and triple mandated shift we work … We cannot continue to do more with less without dire consequences to both staff and incarcerated individuals.”

“If the state refuses to compensate people fairly and maintain adequate staffing levels, frontline prison staff will continue to leave,” Hayward said. “They are being forced to work 16 hours a day, 5 days a week, with no support and no relief in sight.”

Brian Larson, a correctional officer at the Manson Youth Institution in Cheshire, said that another result of inadequate staffing has been fewer counselors for inmates, leaving incarcerated people without access to mental healthcare.

Larson also said that the pandemic has created additional responsibilities for prison staff, such as administering video visits and navigating changing prison policies. More than 1,400 correctional staff have tested positive for COVID-19 over the course of the pandemic, which has decimated prisons and other congregate areas.

“Right now, no one is going to work for 8 hours,” Larson said. “There is an abundance of mandated overtime due to exhaustion from Covid outbreaks and staff shortages. We operate on rolling 16 hour shifts during which we arrive at their designated time, get drafted for another 8, commute home, decontaminate their uniforms, shower, meal prep, and get approximately 4.5 hours of sleep—only to repeat the process three days in a row.” 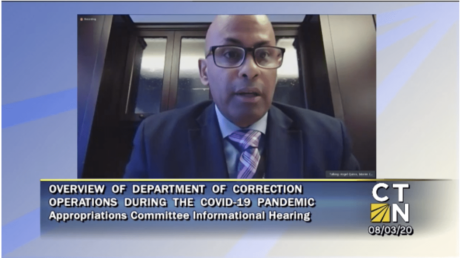