There are many adaptations of Don Quixote — a story originally written by Spanish author Miguel de Cervantes in the early 17th Century — from the Joe Darion and Mitch Leigh musical “Man of La Mancha” to the Terry Gilliam film, “The Man Who Killed Don Quixote.”

In the prescient musical play “Quixote Nuevo,” playwright Octavio Solis has brought Quixote to Hartford Stage and a modern day American setting in a production directed by KJ Sanchez that runs through October 13.

Set in and around the fictional Texas border town of La Plancha, mentally declining literature professor Jose Quijano — played by longtime Sesame Street alum Emilio Delgado — is being wrangled by family and friends to be put in a senior care facility.

Not content to live out his final days in a room where he’d slowly dwindle to nothingness, Quijano takes up his helm, er bedpan — or more properly “headpan” — in a fit of passion taking on the persona of Don Quixote on a quest for his beloved Dulcinea (Gisela Chipe) who is across the border in Mexico.

Along the way he picks up his neighbor, ice cream salesman Manny Diaz (Juan Manuel Amador), to be his Sancho Panza.

Solis’ writing is a beautiful blend of Spanish and English, jumping back and forth between the two languages. Though knowledge of both languages would be beneficial to understand all the humor throughout the show, it won’t prohibit most people from understanding what is going on throughout.

The beauty behind Solis’ language is the lyrical quality of the text. The words roll off the lips of the actors with an almost singing quality, and though the play isn’t a musical there are musical moments included as well, that give the play a certain Mexican romanticism.

There are moments though when the language loses its poetic nature, usually when the language has to take a back seat to the immediate political issue being dealt with in the scene. It’s not that the issue shouldn’t be addressed, but the meter and flow of the dialogue becomes a bit more rigid at times, losing the color that elevates the rest.

Delgado gives a bittersweet, sensitive, yet, at times, hysterical performance as Quijano/Quixote. His back and forth between being cogent and riding through his delusions is beautifully detailed at times, and his confrontation with a border patrol balloon drone is absolutely absurd.

The depth of his abilities as an actor though are reflected in his subconscious moments that are represented on stage through interactions with Papa Calaca (Hugo E. Carbajal) – Calaca being a colloquial Mexican Spanish name for skeleton. Papa Calaca is a sort of emissary of the dead coming to collect Quixote, whom Quixote vehemently defies.

As enjoyable as Delgado is in his performance, Amador gives the most impressive performance of the night. His beleaguered Manny is riotously funny and doesn’t have a weak moment on stage.

Takeshi Kata’s scenic design is gorgeous. Particularly the backdrop which has such meticulously detailed clouds they seem to be three dimensional.

“Quixote Nuevo” is a great start for the new season of Hartford Stage and a touching 2 ½ hours of drama and comedy. 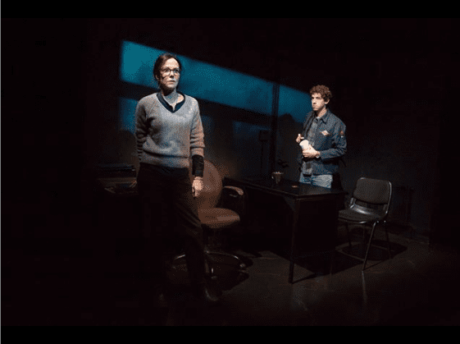