Even at elevation, 2019 must have been a scorching summer in Egra, the spiritual home of Bikaver, Bull’s Blood, a Hungarian red blend dating back to the 19th century or earlier, that leans heavily on Kékfrankos, a local variety of Blaufränkisch.

Across central and southeastern Europe it was the hottest summer in more than a century. In the glass, the 2019 Gal-Tibor Bikaver was spicy, dried fig and raisin, with enough acidity to keep things lively – a bargain for around 22 bucks from Spencer and Lynn in Mystic, and by the glass at Shipwright’s Daughter, where Sommelier Kathleen Standridge and Chef David Standridge recently hosted a sold-out “Volcanic Wine Dinner,” showcasing a handful of lesser-known wines grown in volcanic soils in Greece, Italy and Hungary.

Mid-way through the five-course meal the dining room went noticeably silent – the best sort of compliment for the husband-wife team.

A confit of lamb belly with Dukkah – an Egyptian flavoring of ground nuts and spice —  coconut yogurt, dried olive and salsa verde – was notably loose on the plate, with a dollop of yogurt and sprinkled with whole pistachios. Like the venison, the lamb was cooked just shy of buttery tenderness.

Lamb belly is an off-cut I can’t say I eat enough — a benefit of taking in whole animals into the kitchen, said David. The dish was redolent of the eastern rim of the Mediterranean.

As Standridge explains it, the restaurant’s “core values are the basics — local, sustainable, organic when possible … We source the best products and then determine what to do with them.”

Standridge describes the approach as “product-driven.”

“We test very few complete dishes, and instead focus on putting the ingredients to the best use possible. Swordfish pancetta is a great example of this. We started making it because we only get whole swordfish and had a lot of bellies.”

In the case of a wine dinner – that meant that the dishes are built around specific wines, rather than the other way around. And it shows.  In fact it’s hard to imagine a better showing for 20-something wine.

In the case of the confit, that means that the dish was built around a 2017 Kir-Yanni, made from 100 percent Xinomavro, from Naousa in Greek Macedonia.

Kathleen compared Xinmomavro (at $28) to Nebbiolo, at a fraction of the price.  In this case, think fresh red raspberries practically jumping out the glass, before leaving off with a saline minerality.

In my mind the pairings were an imagined parade of boats returning east to west across the Mediterranean with the spice trade.

In the case of the Arroz Bomba, the little boat stopped off in Sicily as it made its way to Valencia. Essentially a paella with mussels, lobster, squid ink emulsion and sea urchin aioli, the rice would have benefited from a little more time and a little more liquid — a minor misstep — but I was happily distracted by the 2020 Tenuta Tascante “Buonora” Etna Bianco ($20).

The easy-drinking white is made from 100 percent Carricante, a grape grown almost entirely on a few hundred acres on Mount Etna, and known for its citrusy, mineral and herbaceous character.

The 2020 Santo Winery Assyrtiko, from Santorini – a grape that Janine Sacco (formerly at The Wine Thief in Madison)  turned me onto a couple of summers ago — was bone dry, with unmistakable notes of peach and citrus ($24). It is also available by the glass.

These are wines you want to buy and drink — whether at Shipwright’s Daughter or just across the bridge at Spencer and Lynn — and were selected in a tasting by David and Kathleen Standridge, David Mensch of Spencer and Lynn, and Sous Chef Michael McHugh, and winnowed down from a list of 30 grown in volcanic soil. 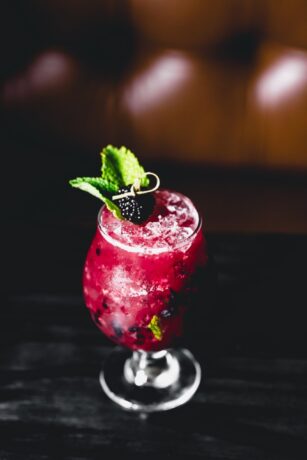 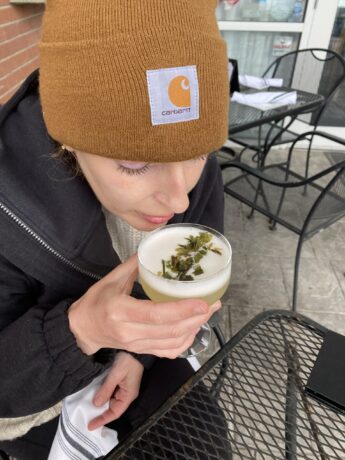 Sugar Kelp on the Menu as Underwater Harvest Underway 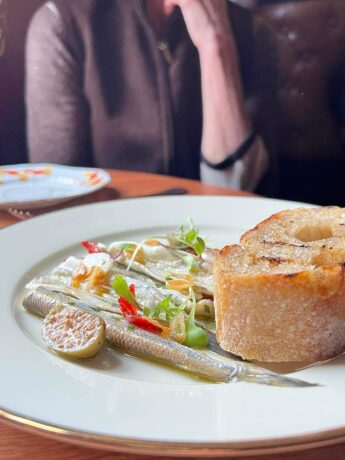 One Week in, Port Of Call Shows Polish